To observe the Kent State Shootings, I’m reposting an essay I wrote 2 years ago.

The night of May 2, 1970 I was a 17 year-old high school senior, living about 40 minutes east of Kent, OH.  One of my brothers lived on campus.  A carload of friends and I hoped to get on campus to party, then stay to join the demonstration against President Nixon’s escalation of the Vietnam War by sending troops into and bombing Cambodia. 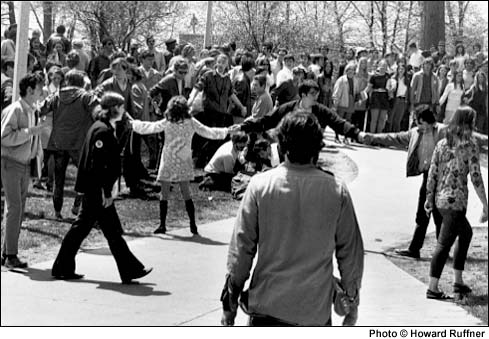 I went to Kent frequently.  I knew several ways onto campus but each was blocked.  To pass, we needed to produce KSU student ID, which none of us had.  After about an hour of trying different routes and tactics, we gave up.  As we drove home,  students torched the ROTC Building, which became a turning point in the ramp up to the events that culminated in the infamous brutality and murder May 4th that will forever be associated with this day.

Ohio’s  governor at the time was a very popular, extremely conservative, arrogant prick, James Rhodes.  He was also perhaps Ohio’s most successful governor. Ohioans just couldn’t get enough of  him.   Rhodes reactions at key points prior to the events on May 4 provoked protesters and made a dangerous situation much more volatile, only to get him re-elected, time and time again.  Back then,  liberal protesters were painted as commie rat bastards. malcontents and outside agitators. Kind of like progressive protesters today.  Funny to note the official law enforcement response between peace marches and “tea parties”.   Police react completely differently.   Guess some things never change.

Don’t get me wrong.  The guard was under assault that day. This situation was different than any other they’d seen.  Many were conflicted and confused.  Outside agitators were present, executing their own agendas (just not to the extent that the government and media reported).

Rhodes had said the students were worse than Hitler’s  “brown shirts”  before WWII.  Nixon called them “bums,” each fanning the flames of hate, paranoia and division. It’s easier to abuse someone you’ve demonized.  These are the politics of hate, which the GOP wholeheartedly, eternally  embraces .

Dismissed by despots of the day as ne’er do wells and miscreants, current wisdom has overcome the sinister, petty politics du jour. By and large,  today most feel that those killed and wounded at Kent State were needlessly victimized.  A stronger, less autocratic  state governor could have not merely controlled the situation but even have averted its tragic outcome.

Instead, Rhodes, a tried and true redneck, turned scared guardsmen into murderers. And some innocent students died or were maimed for life that day due to Ohio’s  belligerent, bellicose governor.

As a result, every May 4th is a special day for me. I remember how much I’d wanted to join the student protest, how hard we tried to get on campus only to be turned away and how grateful I am that fate (or my guardian angel)  intervened that Saturday night–because I know that had I been there, I wouldn’t have been content to be in the back somewhere.  That wasn’t my nature.  I was very passionate in my opposition to Vietnam and liked to be out front.

To our knowledge, Rhodes never really answered for his bad judgment.  In 2001, when he died,  I recalled my decades-long bitterness toward him and finally decided it was time to let go. I still grit my teeth every time I pass his statue, which faces Ohio’s Capitol.  It took me better than a decade to stop flipping it off, which I realize is immature but was nevertheless reflexive. It’s much easier to hate than to forgive.  I no longer hate him but still wrestle with the forgiveness part.  How irrational is it to harbor such feelings for a dead man?